She lifts the hem of her angel costume and beckons him closer. In the dim light of the party host’s bedroom he can see she’s not wearing any underwear.

“Not a natural blonde then, eh?” He chuckles at his joke. He can’t believe his luck. It’s easy, too easy.

“Crawl to me, slowly,” she orders.

Dropping to his knees, he obeys. Closer, closer, his heart beating faster, faster, pounding to the tempo of the Halloween music booming below. Now his head is bowed at her white stilettos. He follows the curve of her bare, sweet smelling calf with his lips, his tongue. This is his first time. Anticipation is ringing in his ears. Now up her thighs, spread just wide enough to take his cheeks between and squeeze, gently, as he rises towards his prize.

But suddenly everything is wrong! Cold, so cold and horrifying! He’s face to face with a swarming mass of scorpions!! He cries out, falls back, traumatized down to very gut of his manhood.

“Holiday birth control at its finest,” she laughs, and walks over him back down to the party.

Arrange plastic insects/scorpions/spiders into a… um… suggestively pubic simulation. Sew to secure in place. And because this subversive craft is all about ‘subtlety’, chose critters that match your natural… um… hair colour – cockroaches for blondes, scorpions for brunettes. Oh, and that green beetle fellow if you’re in the mood for a Brazilian rainforest surprise ~wink.

Note: This technique can also be used to DIY the most frightening Halloween underwear of all… Microsoft, Star Trek, and Noam Chompsky certified NERD PANTIES!! Although I think the scariest thing here is that I actually own all these pins.

Trick or treat? This storied Halloween dessert idea delivers both, with a subversive twist. Because what’s any holiday without a little sex and death served up to the table?

The man with the neon kindergarten funland tray is not Tom’s brother. Can’t be. Tom has never seen the familiar face twisted into such a mischievous grin. The devil horn headband – lent by one of three darling nieces sitting at the dining table with Tom and his wife – completes the disguise.

“The treat is the gummies and the trick? Well girls, you’ve got to go hunting to track down your prey,” explains their uncle, setting down the tray.

One tiny pink hand reaches out and grabs a gummy mouse right out the nearest snake’s mouth. Then bedlam! Streamer and ribbon and sugar everywhere! The hunt, the competition, the strategy, the deliciousness!

Tom ignores the mayhem. His total focus is on the two other adults at the table. His brother and his wife. What’s this feeling? Jealousy? Fear? All the joy of her children is being channeled into his wife’s eyes, her delicate quivering nose; her small pink rosebud mouth is half open in ecstasy. There is another hunter at the table. All history rewrites itself, swirling under the tsunami of this new ordering. It all makes sense to Tom, everything – suddenly, horribly. And he sees on his youngest daughter’s face that same terrible grin for the second time tonight. Too much the same. 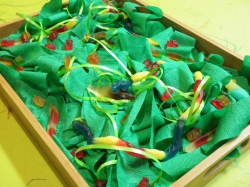 Cover tray with foil or plastic. Add streamer and ribbon – be as messy as possible! Cut slits in snakes’ mouths to hold prey. Distribute gummies, hiding half between layers of streamer. Happy Hunting!